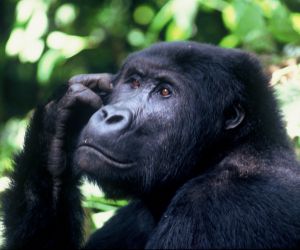 Gorilla Trekking is offered in Uganda, Rwanda and on a smaller scale in the Democratic Republic of Congo. In Uganda there are two areas where the gorillas are trekking namely Magahinga which is part of the Virunga Mountain and at Bwindi Impenetrable Forest. In Rwanda trekking is done at the Volcanoes National Park in the north and at Virunga in the DRC.

Gorillas are social animals living in family groups lead by a dominant silverback. The group is not territorial the silverback however does defend his group from outside males and other animals.

There are only 6 permits issued per day to visit each habituated gorilla group. Trekking these animals can take anything from half an hour to 8/9 hours and sometimes you might not even see them. The groups are closely watched by rangers though so this does not happen very often. When you find the group you are only allowed to spend an hour in their presence at which time you move away and leave the group in peace.

The gorilla habits are uncannily similar to humans and the way they interact will leave you in awe of their intelligence.

There are strict rules about behaviour when visiting the gorillas and these are explained before going on a trek. The gorillas are very susceptible to contracting human diseases and therefore if anyone is ill with a cold or flu they will not be allowed to go on the trek.

The Mountain Gorillas are a critically endangered species, who are threatened by loss of habitat, poaching, disease and civil wars.

Trekking the gorillas is an unforgettable experience, something that will stay with you for the rest of your life.