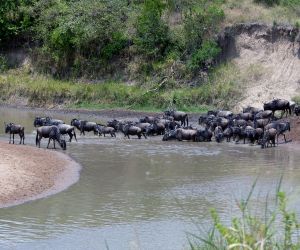 The Masai Mara is world famous for the Wildebeest migration that takes place annually between the Masai Mara and the Serengeti.

The park is made up mostly of grasslands with seasonal rivulets, in the south east there are clumps of acacia tree and the western border is made up of the Siria Escarpment.

The park is unfenced from the local communities land and often you can see cattle and wildebeest grazing together on the plains.

The park is also home to many research projects and studies, possibly the best known documentary series which has been filmed in the Mara is the Big Cat Diaries.

The Great Migration is a natural phenomenon which has been taking place for hundreds of years – it is a circular route undertaken by about 1.7 million wildebeest, 200 000 zebras and thousands of gazelle.

The height of the migration in Kenya happens in July / August when the wildebeest cross the Mara River into the Masai Mara Game Reserve. Here they typically stay until about November when they return to the south.