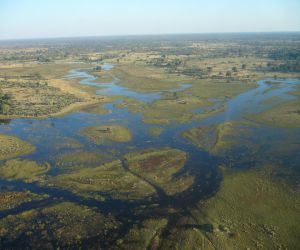 The Okavango Delta ranges in size from about 6000 km ² in the dry season to 15000 km² during the flood season. Rainy season in the Angolan highlands is from December through March but that is the time that the Delta is at its lowest – it takes time for the water to reach the Okavango Delta with the highest levels of the Delta recorded between May and June.

The Delta is home to a wide array of wildlife both permanent and migratory. It is also home to over 400 species of bird and 71 species of fish.

There is no better way to experience the Okavango Delta than by mokoro. A mokoro is a traditional wooden canoe which has been carved out of a big strait tree which is propelled along the waterways of the Okavango Delta by a poler standing in the stern pushing along with a pole.

These days most of the new mokoros are made from fibreglass in order to conserve the beautiful large trees in the Delta.

There are many luxury lodges within the Delta which are accessible by light aircraft from Maun or Kasane – each are small and very exclusive so guests feel like they are on a private island.