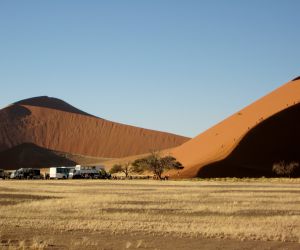 The name Sossusvlei derives from the Afrikaans word “vlei” meaning marsh and the Nama word Sossus meaning “dead end” or “no return”. It is the place where the dunes of the Namib Desert come together and block the flow of the Tsauchab River which hundreds of years ago used to flow into the sea. During a heavy rainy season the Tsauchab still flows and water does end up in the vlei which makes for one of the most bizarre scenes you can imagine.

Over hundreds of years there have been many ends to the Tsauchab river, with dunes growing together and closing the vlei to form a new one. One of these old vleis is Deadvlei which is famous for the dead camel thorn trees which stand like skeletons on the salt pan with one of the highest dunes framing the scene for magnificent photography. Canyonvlei is another one of these vleis with unique sand formations looking like mini canyons.

Other attractions in the area is Dune 45 – which co-incidentally is 45km from the Sesriem campsite – the closest accommodation available to Sossusvlei.

Sesriem Canyon is also well worth a visit which is a small canyon formed by the Tsauchab river before heading to Sossusvlei.