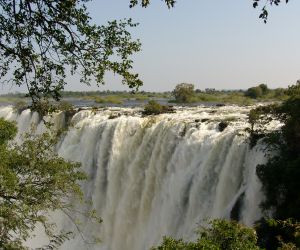 The Zambezi River flows at a width of 1708 metres and falls 108 metres to form the Victoria Falls. The falls were named by David Livingstone who was the first European person to see the falls. He “discovered” the falls in November 1855 and named the falls after the then Queen of England – Victoria.

The Victoria Falls has made it only the list of UNESCO World Heritage Sites and is a sight that you have to see if you visit Africa.

The Zambezi River and the Victoria Falls form the border between Zimbabwe and Zambia with both countries having wonderful views of the falls.

The Zambezi Gorge below the falls has become the home for some of the best white water rafting in the world. A days rafting is taxing and exhilarating and a adrenalin rush like no other.

Other attractions in and around Victoria Falls include scenic flights by helicopter and microlights, kayaking, bungee jumping from the Victoria Falls bridge and sunset cruises above the falls.

The most dangerous rock pool is considered to be above the falls, take a visit to Livingstone Island and you could get the opportunity to swim on the edge of the falls.