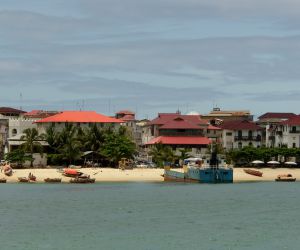 Zanzibar is an island archipelago off the coast of Tanzania which is made up of a number of islands but the two biggest are Unguja usually known as Zanzibar Island and Pemba Island. The capital is Zanzibar Town with the old part of town known as Stone Town and this is a World Heritage Site.

The biggest industries are spices, raffia and tourism. Zanzibar is known for the white beaches and Azure Ocean with many luxury resorts as well as budget friendly lodges. The biggest concentration of resorts is at the northern end of the island as well as the north west. Nungwi is the northern most point and here is a large boat yard and the locals also practise seaweed farming.

The east coast also has a lot of seaweed farming, the ocean here has a very large difference between low and high tide making it suitable for the farming.

The southern part of Zanzibar has the least number of resorts.

Things to do on Zanzibar:

Zanzibar is accessible from the mainland by ferries which leave multiple times per day from Dar es Salaam as well as light aircraft from various locations in Tanzania as well as international locations.